When we visited Athol House in July 2019, we used a piece of music by French composer Joseph Canteloube (1879-1957), called Songs of the Auvergne, as our project inspiration.

Joseph Canteloube was born in the Auvergne region of France, and his most famous pieces are the Songs of the Auvergne, which he wrote over seven years.  They are arrangements of songs in the local Auvergne language, called Occitan. You can find many recordings of them on Spotify and YouTube.

In this activity, we’re going to learn a folk melody that Canteloube used, called “Nai pas ieu de mio“.  Our version has new words in English, which you can learn by watching the learn the song video in the playlist.  When you know the song, you can sing along with the LPO musicians, and play instruments in the gaps between the verses.  There are four videos to help you learn each bit:

Setting up the activity

To select the key of F, tap the #b key near the top right, then select F:

To make the scale pentatonic, tap the Sound key on the top left, then Change Scale, then select Major Pentatonic. 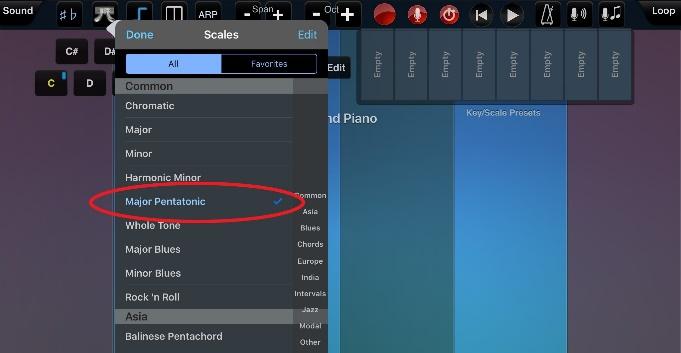 To change each of the chord strips to F major, tap on each one in turn, tap the spanner button on top right, then Edit chords.  Make sure each chord is set to F Maj None None.

Watch John’s next introduction video, then the activity video “Sing and play in the gaps”.

Sing the song as the words come up on screen.

There are gaps in between each verse, which you can use to play instrumental solos, or the whole group playing their instruments in the gaps.

Flowers song- how to set up the activity (PDF) Download